The Slag om Grolle (literal English translation: Battle for Grolle or The Siege of Grol) is a regular historical reenactment of the siege of the fortified border town of Groenlo (formerly known as Grol or Grolle) in the Achterhoek in 1627 during the Dutch Revolt.

Back in 1627, during the 80 years lasted war, the residents in The Hague discussed the possibilities in the battle against the Spanish. After tackling all pro’s and con’s a decision was made that “the strong town Grol should be attacked”. The siege of Groenlo lasted 30 days. Read more about the history here: http://www.slagomgrolle.nl/en/page/grolle-1627.html

Now, these 30 days are comprised to 3 day of battle for the event which is known as “Slag om Grol” (battle of Groenlo). Every day hundreds of re-enactors fight on the battlefield.
During the siege of Grolle in 1627, the Spanish Commander Lambert Verreyken lead some attacks from the city with a cavalry unit on the States positions. And Frederick Henry also had a great number of horsemen under his command.
The public was impressed by the performance of the riders from the Czech Kavalerie Náchod with their horses, because of its original equipment, but also for the overall management of the horses by the riders. These animals are very well trained to undergo the noise and chaos on the battlefield in all calmness.

The re enactment event is held in and around Groenlo every two years. The event lasts for three days and features a historic battle reenactment and a historic fair, with reenactors from many European countries. During the event, the reenactors try to relive the conditions of 1627 as faithfully as possible, without electricity or heating, while eating traditional food.
The event was held for the first time in 2005, with around 350 reenactors, among which were pikemen, swordsmen, around 100 musketeers and working cannons. In October 2008 the event was held for a second time, this time featuring more than 600 reenactors from France, Germany, England, Scotland, the Czech Republic and the Netherlands. The 2008 event included cavalry, 21 working cannons and more than 250 musketeers. The 'Grols Kanon', left behind as a gift to the people of Grol by Frederik Hendrik in 1627, was also used. The Montferland folk music group 'Het Gezelschap' even composed the song "Grol" as a theme song for the 2008 event. In the streets of Groenlo itself a 17th century atmosphere is recreated, with beggars, street rascals, lepers, musicians and artisans. More than 800 re-enactors took part in the battles and 30,000 people came to visit the 2008 event, and it was thus decided by the organizers to hold it every two years. In 2012, 1200 people from more then 46 re-enactor groups from 14 countries enjoyed the Slag om Grolle. These people put their tents along the ditch of Groenlo and have to take care of their selves, like back in 1627: find straw to sleep, food, water.

These pictures were taken on the Battlefield at the 2012 edition and display the Spaniards attack approaching trenches of the States army. Location: Battlefield Schootsveld, Friday October 19, 2012.
Read More 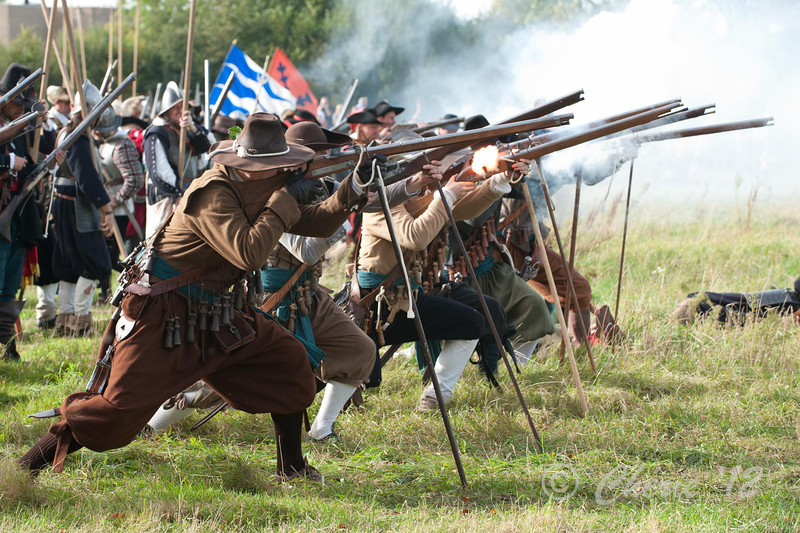 All images (c) 2009 -2020 Chérie Fotografie. No reproduction without creditline